The Need For Igbo Senators To Push For New States Creation

Among the Memoranda collected by the Secretariat of the committee included those for Gender Equality for Women and Girls; the Federal Structure and Power Devolution; Local Government and Local Goverment Area Autonomy; Public  Revenue, Fiscal Federalism and Revenue Allocation, Nigerian Police and Nigerian Security Architecture; Comprehensive Judicial Reforms; Electoral Reforms to strengthen INEC to deliver credibly free and fair elections; Immunity amongst others. There was also the call for State creation from groups like the Christian Association of Nigeria (CAN), Movement for creation of Zuma State out of Niger State, Movement for creation of Savana State out of Gombe, Taraba and Adamawa states, Yiaga Africa, Okun Development Association, Benue State Government, Concerned Nurses Association of Nigeria, Urhobo Progressive Union and Zontai International, among others. 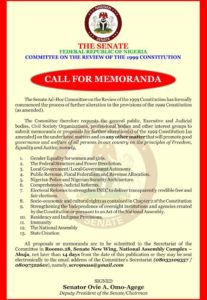 Omo-Agege had advised State creation agitators that getting the buy-in of other Legislators and groups from other parts of the country are key and very important for such agitations if they are to see the light of the day.

His words: ‘Let me also make this clear that the constitutional review exercise is not a tea party by any means. It is a very tedious exercise. If you check Section 9 of the Constitution, it lays out a very difficult procedure that you must go through before you can achieve success with respect to the amendment.’

‘That is even more tedious than every other procedure because unlike other sections of the Constitution that recognises a constitution amendment bill to pass with a two-third majority of both chambers here and a two-thirds majority of state assembly, for state creation, which is under Section 8, it requires four-fifth of the majority. Even more majority than the regular two-third.’

‘But that is not to say it is impossible. If the demand is genuine and legitimate, there is no reason why it should not succeed. But you have to do the needful. You have to reach out to others. You have to lobby as to why this should be the case.’

‘As the Chairman of this committee, I am not supposed to take a position. You have to reach out to people, different geopolitical zones and make your case.’

‘If they see the merit in your argument, then they could, acting through their members in the House of Representatives and Senate, go with you and vote in support. You have to go out and lobby. You don’t stay at home and they reward you with a free state. It is only in the military that states are created by Fiat. But under democratic set up in the 1999 Constitution (as amended), the procedures are well laid out under Section 9 of the Constitution.’

This opportunity would be very wonderful for the Southeastern region of Nigeria to push for more states to be carved out in region. This is because, three out of the six geopolitical zones in the country have six states each, one has six states and the Federal Capital territory, Abuja and another has seven states while the Southeast Zone, Igboland, has only five states, the least in the country.

There is an important need for the Southeastern region to house more states, at least three states as this will help rid the region of the huge marginalisation they currently suffer under the Buhari-led Government.

In 1960 when Nigeria finally gained political independence from Britain, she inherited the three regions created in 1946. As was the case in many African countries that were created by colonial rulers, Nigerian statehood preceded and undermined the crucial goal of Nation-building, and as such the country became a country inhabited by many ‘nations’, each striving to maintain its unique cultural heritage, linguistic identity, and self-preservation as a distinct people. But by achieving each of these group-preserving goals, the nation-state of Nigeria was further removed from the ‘official’ aspiration of national integration. This goal, however, has remained elusive because all ethnic groups in the country, by temperament, tradition, have continued to prefer their ethnicities for political and social identification.

In order to achieve the goal of national integration, and thus move Nigeria away from destabilising ethno-centric politics, successive governments embarked on further divisions of the regions to create more states with the expectation that, as more groups were given the right to semi-self governance through a state they could claim as theirs, a loosely governed federation would facilitate the establishment of an enduring nation, and economic prosperity for individual states and their citizenry. Moreover, the quest for self-governance by some of the major ethnic groups soon after independence added the needed impetus for the creation of more states, and by 1963 one more region was added to the federation. In 1967, the four regions evolved into twelve states; seven more were created in 1976, and by 1987 a total of twenty-one states had been created. Between 1991 and 1996 fifteen additional states were added to the lot, and today Nigeria is formally comprised of thirty-six states and the Federal Capital Territory, Abuja.

It should be noted that the initial impetus to create more states derived from the political necessity to accommodate the fears of social and economic marginalisation harboured by many ethnic groups but by the 1970s, the drive for more states could no longer be justified by concerns of political and economic subjugation; oil had become a major source of revenue, and the Northern political elites needed more avenues to access its benefits, thus the drive for more states. In 1970, for example, the Military Government changed the formula by which oil revenue was shared amongst the States. The new one set aside 50% of oil revenue in a Distribution Pool Account and allocated the funds equally to the states, and another 50% was proportionally distributed on the basis of the state’s population. This new formula meant that ethnic groups that remained intact were disadvantaged; more states from these groups were needed to off-set the obvious disadvantage. Thus as more states were created from a former region or ethnic group, more oil revenue accrued to that part of the country. This was why there were more states in the Northern region than in any region.

This formula has to be effectively amended to grant the Southeastern region more states for better allocations and funding and this can only be made possible if the Southeastern Senators do their jobs in the Senate. The Memoranda is a wonderful avenue to vent the grivances of the marginalised people of the Southeastern region and it would be foolhardy to waste this vital opportunity to join other regions in pushing for what is rightfully theirs.

Nigeria In Chaotic Disorder, Has No President

Garba: The Running Dog Of The Corrupt Nigerian Government

Patami: A Religious Bigot Who Has No Business As A Minister