Spain has recorded more than 700 deaths over the past 24 hours, surpassing China in the total death toll, making the country now second to only Italy.

Meanwhile, India’s 1.3 billion people have joined the global lockdown triggered by the outbreak as the World Health Organization (WHO) expressed concern at the acceleration of the pandemic in the United States. On Wednesday, Russia also ordered non-essential workers to stay home next week.

The White House and Senate leaders of both parties have struck an agreement on a sweeping $2 trillion measure to aid workers, businesses and a healthcare system strained by the rapidly spreading coronavirus outbreak.

Over 111,000 of the 435,000 people diagnosed with the disease have recovered, according to data collected by Johns Hopkins University. More than 19,000 people worldwide have died from COVID-19.

Here are the latest updates:

The Spanish Confederation of Medical Unions (CESM) has presented a legal demand to Spain’s Supreme Court asking the health ministry to provide sufficient protective equipment as soon as possible.

CESM alleged the ministry had so far failed to provide professional health workers with sufficient protection to carry out their work in a manner which reduces the risk of catching coronavirus.

The number of people who have lost their lives because of the infection in Spain has reached 3,434, among  47,610 infections.

16:10 GMT – Jerusalem’s Church of the Holy Sepulchre closed due to coronavirus

Jerusalem’s Church of the Holy Sepulchre, revered in Christian tradition as the site of Jesus’s crucifixion and burial, has been ordered closed as a precaution against the coronavirus, church officials said.

“The Church of the Holy Sepulchre will be closed from 5 pm on Wednesday,” Wadie Abu Nassar, media spokesperson of the Assembly of Catholic Ordinaries of the Holy Land, told Reuters news agency.

He said the decision followed a meeting between Israeli police and senior church leaders on Wednesday.

The Group of Seven (G7) big economies discussed an “intentional disinformation campaign” by China on the coronavirus in a virtual meeting on Wednesday, US Secretary of State Mike Pompeo has said.

At a State Department news conference, Pompeo repeated previous charges that China had delayed sharing information about the virus and said all G7 members were “deeply aware” of Beijing’s disinformation campaign.

German Chancellor Angela Merkel has tested negative for coronavirus for a second time and will undergo another test at the beginning of next week, a government spokesman said in a statement.

Merkel has been self-quarantining and working from home after receiving a vaccination from a doctor on Friday who was later found to have the virus.

“The chancellor continues to work from home quarantine,” the spokesman added.

Ireland’s health minister has condemned an apparent coronavirus-related prank in which people cough in the face of strangers then post a video on social media, and he said he was the target of one such stunt.

“It is not a game, it is disgusting, that you will target certain people in your community, generally older people, and go up and cough in their face and video it and have a laugh and run off,” Minister Simon Harris told a news conference on Wednesday.

Harris, the public face of Ireland’s fight against the virus, said a man and a woman on the street coughed directly at him and ran off laughing when he was walking between his office and government buildings on Tuesday.

Tunisia has confirmed 59 new cases of the coronavirus, Health Minister Abdelatif el-Mekki said in a televised news conference, taking the total number to 173.

Tunisia has instituted a curfew at nights and a lockdown during the day in which people are only allowed out to buy food or medicine or work in some key sectors.

Estonia has recorded its first coronavirus death, when an 83-year-old patient died in Tallinn, the daily newspaper Postimees reported, citing a hospital spokesman.

Estonia has so far recorded 404 infected people, according to official statistics

15:30 GMT – Coronavirus death toll in Italy’s Lombardy rises by about 296 in day

The death toll from an outbreak of coronavirus in the northern region of Lombardy, which has borne the brunt of Italy’s contagion, has risen by about 296 in a day to some 4,474, a source familiar with the data told Reuters news agency.

The figure is down sharply compared to some 402 deaths on Tuesday. If confirmed, it will be the lowest daily death toll in Lombardy since March 19.

The number of cases in the region, which includes Italy’s financial capital Milan, increased by some 1,643 to roughly 32,346, the source said. 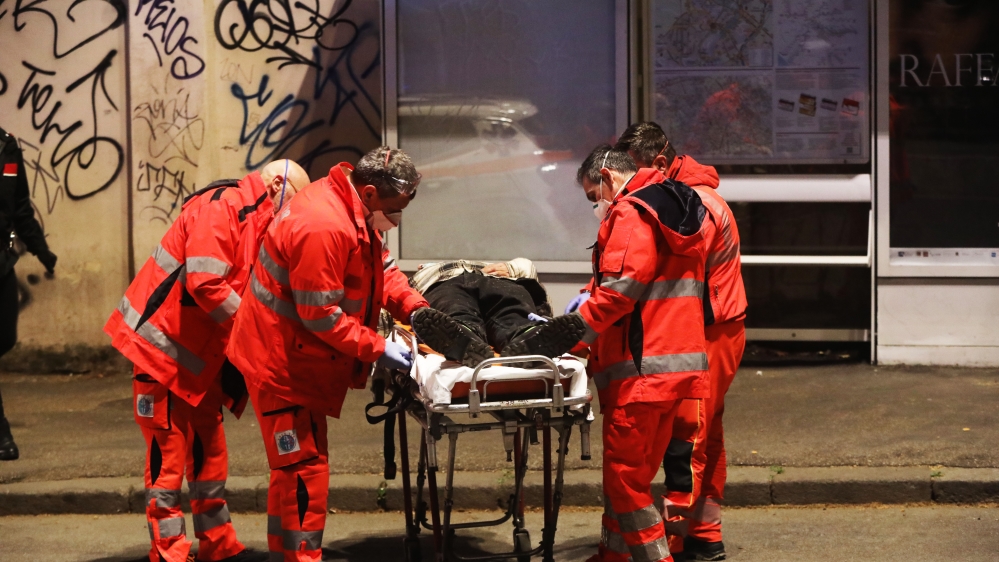 A man wearing a protective mask, who was lying unconscious on the ground near a bus stop in Rome, is carried away by the medical personnel from an ambulance as the spread of the coronavirus persists [Marco Di Lauro/Getty]

15:25 GMT – London City Airport to close until end of April

London City Airport has said it will suspend all commercial and private flights from Wednesday evening until the end of April following Britain’s order that people should stay at home and stop travelling.

“At this point in this fast-moving and unprecedented situation, we think this is the responsible thing to do for the safety and wellbeing of our staff, passengers and everyone associated with the airport,” it said.

An important update from the airport at the heart of London.

We’re looking forward to welcoming you back soon. But for now, stay home and stay safe. http://www.londoncityairport.com/coronavirus

Egypt has started deep cleaning the area around the Giza pyramids as authorities work to disinfect tourist spots closed down by the coronavirus outbreak.

Workers wearing face masks and gloves swept and sprayed the walkways around the bases of the pyramids, as well as the ticket office and a visitor centre – though the giant stone structures were not themselves cleaned, Reuters news agency reported.

All of Egypt’s famed archaeological sites and museums from the Egyptian museum in Cairo to the Valley of the Kings in Luxor have been shut since Monday as authorities try to prevent coronavirus from spreading. 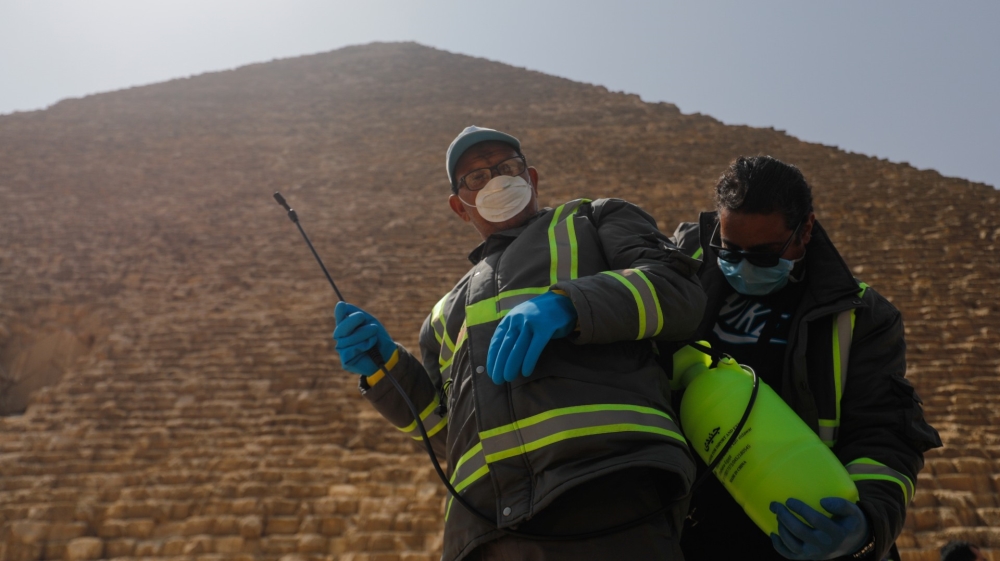 Members of the medical team prepare to spray disinfectant as a precautionary move amid concerns over the coronavirus outbreak at the Great Pyramids, Giza, on the outskirts of Cairo [Amr Abdallah Dalsh/Reuters]

The patients are a Congolese UN employee and an Indian citizen, and both have been placed in quarantine, he said, adding that public transport would be suspended to limit the spread of the virus.

Countries must protect people in detention from the COVID-19 pandemic by releasing vulnerable prisoners, the UN’s rights chief has said.

“Covid-19 has begun to strike prisons, jails and immigration detention centres, as well as residential care homes and psychiatric hospitals, and risks rampaging through such institutions’ extremely vulnerable populations,” Michelle Bachelet said in a statement.

“Authorities should examine ways to release those particularly vulnerable to COVID-19, among them older detainees and those who are sick, as well as low-risk offenders.”

Switzerland has introduced temporary restrictions on the export of protective equipment to head off shortages among medical staff and others fighting the coronavirus outbreak.

Licenses will now be needed to export masks, gloves, goggles and swabs as of March 26, the government said on Wednesday. Exceptions to the licensing requirement will apply to the EU and the three other states in the European Free Trade Association as long as they treat Switzerland the same way, it added.

The government also announced a raft of measures to cut red tape related to recruitment and short-time working. The measures are designed to make it easier to recruit medical, pharmaceutical, agricultural or logistics workers, it said.

“The Prime Minister wishes the prince a speedy recovery,” the spokesman told reporters at a briefing.

Charles’s household said the prince was displaying “mild” symptoms of the disease. 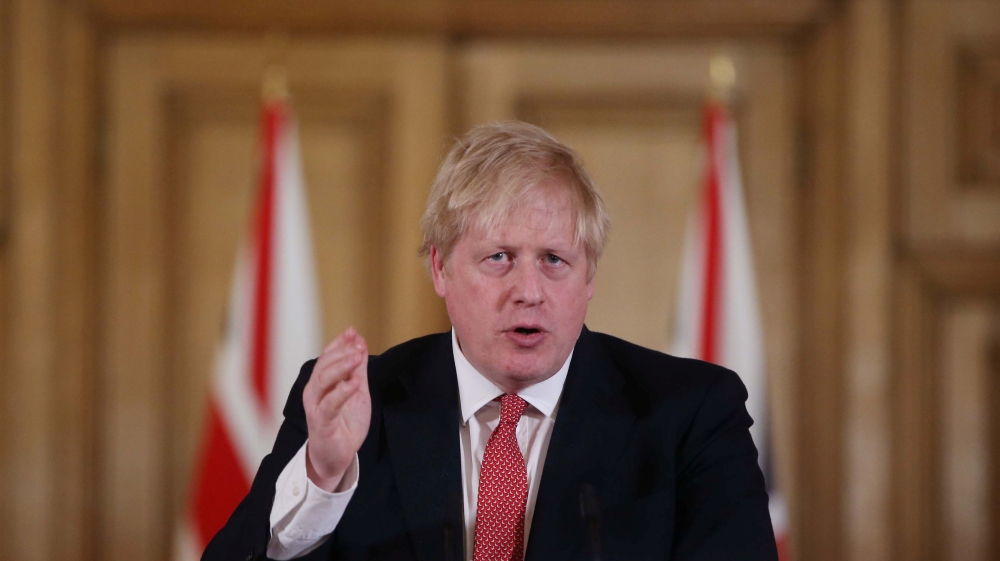 The number of confirmed coronavirus cases in the Netherlands has risen by 852 to 6,412, health authorities said, adding that they see signs that the rate of increase of the virus’s spread in the country is slowing.

Deaths rose by 80 to 356, the National Institute of Health (RIVM) said in its daily update on the outbreak.

“The number of new patients received at hospital had been on an upward curve recently,” the RIVM said. “At this moment that seems to be leveling. That may point to a small reduction of the rate at which the virus is spreading.”

Singapore has reported 73 new cases of coronavirus cases on Wednesday, the city-state’s biggest daily jump, taking its tally to a total of 631 infections.

Two people have died from COVID-19 in the island nation, which has been hailed for its response.

Difference Between The Demons In Nigeria And London – Adeboye

Why We Won’t Beg ASUU Over Strike, Parents Lambast Keyamo

Biden Frowns At Killings Of Four Muslims In US City

Families Of Trapped Mexican Miners Cry Out Of Desperation

Nigerian Govs Blasted For Advising FG To Retire Workers Above 50